Managing complexity is a major problem facing manufacturing companies. Much of ‘lean’ thinking is about how to tackle it. This research took a different approach by seeking to develop a way to measure complexity. The basic idea is that measurement is a necessary first step in coming to grips with the problems it causes in the factory. To understand what the measurement process involves, think of a manufacturing system as an obstacle course that products have to negotiate. The measure, in effect, counts the obstacles and calculates the height of each. The measure is called the operational complexity of the process. Formally it is an estimate of the entropy generated by the process. Entropy can be thought of as the rate at which an observer needs to record information, in order to understand the workings of the system.

The model makes a number of predictions. These include:

In general, the presence of complexity has the effect of stressing manufacturing systems.

The research had two aims. The first was to construct the measure. The second was to see if it could be applied in practice.

The first major objectives was to develop a methodology for carrying out measurements. The second was to see if, when applied in different types of plant, it produced information that was relevant to management and led to effective actions being taken.

The first results showed that it was possible to apply the measurement in factories and obtain results that were of use to management. In particular the indices give an overview of the way a plant is performing. Since the completion of the early project, the ideas have now been tested in eighteen plants in the US, UK and Germany, and by researchers from the Universities of Oxford, and Cambridge and Cranfield. In every case, the result has been helpful to the company concerned.

Moreover subsequent work has suggested that the measure is applicable to other types of system such as supply chains (see Complexity in the Supply Chain) and paperwork systems.

Identification of a persistent bottleneck in a complex manufacturing process 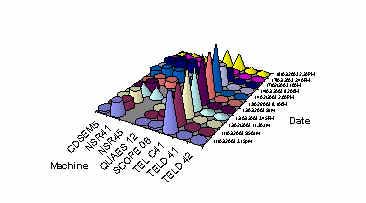