QUESTION: How do we get better at taking the research knowledge from our science and engineering base and turning it into technologies, industries and economic wealth?

The IfM’s Centre for Science, Technology and Innovation Policy (CSTI) aims to give policymakers the information they need to provide effective support for emerging technologies and industries.

There is concern among some policymakers that the UK is not as good as it might be at turning its world-class research into thriving industries and businesses. In recent years, the UK government has been looking for new and more reliable ways to ensure valuable innovations can cross the so-called ‘valley of death’ – the point at which they often fail to translate into a technology that can be scaled up and commercialised. However, for government initiatives to be effective, the people who design them (and invest taxpayers’ money in funding them) and the people who put them into practice need to have a better understanding both of the technologies themselves and of the industries within which they are deployed.

Which is where CSTI comes in.

A clear sense of direction

Before coming to the IfM, its founder and director, Dr Eoin O’Sullivan, was part of the team that set up Science Foundation Ireland. Encounters with research councils and government agencies informed his view that much of the R&D and innovation policy research coming out of universities was ineffective in informing the strategies and programmes of innovation agencies because it was not getting to the right level of detail with regard to technologies and manufacturing systems.

Eoin contends: “For some innovation policy challenges you need to open up the ‘black box’, particularly when you are looking at the specific needs of a new research field or emerging technology. If you don’t do that, the people who are making policy and investment decisions about which technologies, manufacturing processes and sectors to support are doing it in the dark.”

Eoin joined the IfM in 2007, working initially on its Emerging Industries programme. He was also on part-time secondment to the Department for Business Innovation and Skills (BIS), giving him the opportunity to further explore its evidence needs first hand and to make sure that relevant findings from Emerging Industries were communicated to the right people in BIS, Innovate UK (then TSB) and the research councils. Then in 2012, with funding from the Gatsby Foundation, he was able to establish the Centre for Science, Technology and Innovation Policy – a new research centre dedicated to doing the kinds of research which would provide policy practitioners with evidence that could offer firm foundations for their decision-making.

“For some innovation policy challenges you need to open up the ‘black box’, particularly when you are looking at the specific needs of a new research field or emerging technology. If you don’t do that, the people who are making policy and investment decisions about which technologies, manufacturing processes and sectors to support are doing it in the dark.”

At first glance, the IfM may not seem to be the obvious home for an innovation policy research unit. They tend to be found in business schools or economics faculties. But the IfM is, arguably, exactly the right place for it. CSTI is embedded within a research environment which is actively engaged in understanding the whole spectrum of manufacturing activity, from cutting edge work in nano- and ultra-precision manufacturing processes and production technologies, through product design, technology and innovation management to global supply chains and developing new service-oriented and sustainable business models. This means that policy research here is surrounded by – and highly attuned to – the real manufacturability, scale-up, operational and management challenges which emerging science and technologies face.

But it is not just absorption by osmosis, useful though that is. CSTI offers policy research support to a number of IfM research programmes, including the EPSRC and ESRC-funded ‘Bit-by-Bit’ project looking at the interconnected technological, commercial and policy issues around the emergence of 3D printing. It is also collaborating with a new IfM research group, Fluids in Advanced Manufacturing, through the ‘Pathways to Manufacturing’ project, which, again, is concerned with the risks and challenges associated with manufacturing a new technology at a commercial scale.

Forging connections with researchers beyond the IfM is also important. Eoin believes that to understand fully the economic aspects of emerging technologies, engineers, economists and management researchers need to pool their expertise: no one discipline is capable of making significant progress on its own. The Babbage Industrial Network (see box) is a CSTI-hosted initiative designed to share ideas and develop a common language across these different specialisms.

As well as making connections across the research community – and contributing to their research findings and recommendations – it is vital for the CSTI team to have close working relationships with government and agency officials in order to understand their evidence needs and, where possible, co-design research projects to address them.

This is a forum for bringing together experts from economics, engineering and operations management to address some of the most important challenges around emerging technologies, manufacturing and their role in the economy – challenges which no single discipline can address on its own. The Forum has attracted some very high profile speakers from both the academic and policy communities and the Babbage community is continuing to grow.

In September, CSTI hosted the first Babbage Symposium, bringing together internationally leading economists, political scientists and engineers with policymakers from around the world to consider the question ‘What future for manufacturing?’

To this end, there is a steady two-way flow of traffic between CSTI and government departments. Research Associate Dr Charles Featherston, for example, has spent time embedded within the manufacturing policy team at BIS, looking at how different policy levers can be used to nurture emerging manufacturing technologies. Paul McCaffrey, based in the Government Office of Science and project manager for the Government’s recent Foresight project on the future of manufacturing, came to the IfM to reflect on what had been learnt from running the Foresight exercise and to integrate those findings with CSTI’s analysis of how such things are done in other countries. Belinda Clarke, now the Director of AgriTech East, spent time at CSTI in 2014, while she was the lead technologist for Synthetic Biology at Innovate UK, building an evidence base for her calls for funding.

CSTI is also directly involved in developing and delivering services that IfM Education and Consultancy Services (IfM ECS) provides to national and regional governments around the world, helping them understand the global industrial landscape, their place within in it and the opportunities and challenges they face. This includes work IfM ECS is currently doing on behalf of BIS and Innovate UK, looking at high value manufacturing in the UK in order to prioritise investment in key areas of potential growth.

CSTI’s research addresses a range of difficult questions. What kinds of infrastructure, for example, does an emerging technology need as it ‘pushes’ out of the science base? As a country adopts more proactive industrial sector strategies, what are the particular competitiveness challenges faced by each sector for which there may be innovation, technology or R&D solutions? Standards and regulations are also important: knowing the ‘rules of the game’ and the very direct effect they have on the context for emerging technologies and industries.

University-industry knowledge exchange is another of CSTI’s core research themes. The distinctive CSTI approach is also evident here: getting into the details of the technology to unpick why it is that programmes work for some categories of technology and for certain types of maturity in certain sectors, and not in others. Research Associate Tomas Coates Ulrichsen recently ran a US-UK workshop on long-term strategic partnerships with a distinguished set of participants from Berkeley, MIT and Georgia Tech as well as GSK, Boeing and Rolls-Royce. Eoin explained: “By involving the right people and really drilling down into the detail, we uncovered some interesting implications for universities and funding bodies, arising from the fact that big companies are increasingly choosing to work with just a handful of world-class universities.”

“We like to think we are providing a certain type of research-based but practical evidence which is of real value to policymakers and programme planners and which no-one else is really geared up to give them.”

Turning science into technologies and then into economic wealth is an international race. To have any chance of competing, policymakers need to understand what makes some countries faster and better at it than others. This has become a key focus of CSTI activity and the team has developed a robust framework for undertaking country comparisons. It recently contributed to the Hauser report on the UK’s Catapult network, looking at how similar bodies work in other countries and what lessons might be learnt for the UK. The team is currently working on a study commissioned by the EPSRC on how different countries are investing in quantum technologies.

In addition to these comparative studies, Research Associate, Dr Carlos López-Gómez, has established a series of International Policy Forums, at which academics and policymakers come together to understand how policy institutions and processes work in different countries. Three have been held so far, focusing on Japan, Singapore and Germany. Carlos is about to go on secondment jointly with the University of Tokyo and the Centre for Research and Development Strategy, part of the Japanese Science and Technology Agency. He will be looking at the role of government-funded bodies – akin to Catapults – which support the translation of science into commercially successful technologies.

CSTI has also been centrally involved in setting up a more policy-practice series of international workshops, convened by IfM, at which senior UK government, agency and industrial representatives build closer links with their counterparts in key countries and share their experiences and best practice. So far, workshops have been held in Japan, India and the USA (at the White House). Another is planned for Berlin early next year, looking particularly at foresight exercises and emerging technology strategy development, with participation from the BIS Innovation Directorate and the Government Office for Science.

Ultimately, all these countries are facing similar challenges: how do they develop effective policies for manufacturing, for key technologies and sectors and how do they join all of that into a coherent industrial strategy? Getting this right, clearly, has enormous implications for national prosperity. And CSTI is determined to play its part. By working with scientists, engineers, management researchers and economists and by not being afraid to open up that ‘black box’, the team at Cambridge is doing something new and distinctive. Eoin said: “We like to think we are providing a certain type of research-based but practical evidence which is of real value to policymakers and programme planners and which no-one else is really geared up to give them.” 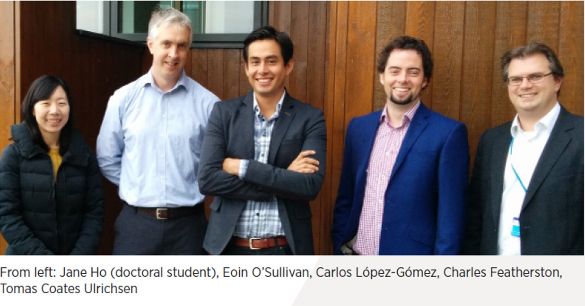