Getting creative in the kitchen

Richard Joseph took the one-year postgraduate Advanced Course in Design, Manufacture and Management (ACDMM, now Industrial Systems, Manufacture and Management, or ISMM) at the IfM in 1998. In 2003 he set up Joseph Joseph, the innovative kitchenware company, with his twin brother Anthony. It now has a turnover of £40 million, sells its products in 104 countries and has 80 employees.

Richard was talking to Andy Neely, Director of the Cambridge Service Alliance and the Royal Academy of Engineering Professor of Complex Services at the University of Cambridge.

Andy: Why did you apply for ACDMM?

Richard: Anthony and I both did A-levels in design and technology, and Anthony did art which he was very, very good at. We both went on to do industrial design at university, Anthony at Central Saint Martins, which was more about aesthetics, and I went to Loughborough, which was more engineering oriented. In my last year at Loughborough, a friend told me about ACDMM. I got a place but deferred it for a year as I had also been offered a job as a design engineer at Dyson and I wanted to give that a try first.

In the end, I decided to leave Dyson for ACDMM and it was absolutely the right decision. I always knew that I wanted to work for myself but I wasn’t sure at what and the course in Cambridge was perfect, giving me exposure to lots of different industries and businesses. 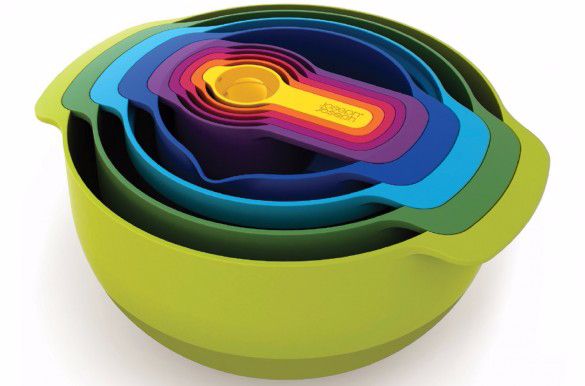 What were the best things about it?

Definitely the practical aspects. Going out into industry and doing one and two-week projects all over the UK. And between projects we were visiting companies and were able to ask them questions which really allowed me to explore my thoughts and ideas and to understand how businesses work. I would never have got that from another course.

The coursework and the lectures all had a practical aspect and gave you a set of skills and knowledge that you could take into a business and understand and solve a problem. It also taught you to go round a firm and talk to everybody. You have got to have good communication skills and be able to engage with people. A lot of the people in my year went off to do management consultancy and became very successful at it. Others have joined blue chip firms doing similar project work and have also done very well.

So how did Joseph Joseph come about?

I came out of ACDMM keener than ever to work for myself but still not knowing at what. We had a family glass manufacturing business which my grandfather had set up in Birmingham in the 1930s. Dad said that if I wanted to set up my own business, I had to know how to sell, and that I should come and sell for him.

At the time, Dad had a subsidiary of the main manufacturing business which wasn’t doing so well. It had about 25 employees and made glass cutting boards. He asked if I would step in as managing director. Meanwhile, Anthony had become a very successful freelance designer in London, working for a lot of major consumer goods brands. He did some modern designs for the boards and I was doing the sales and understanding the business and trying to turn it round. We had a really interesting time and learnt a lot but in the end we couldn’t save it. We sold everything except the glass cutting boards. And that became Joseph Joseph, which we launched in 2003, with four products and 15 customers.

The idea was that Anthony would look after the design side and I would look after the commercial, although we both have a keen interest in design. But that was how we were going to keep our roles separate. When you are twins it is very important to have your areas of specialty. The two of us are quite competitive, particularly with each other, so it works well and spurs us on to drive our own areas of the business. At the start we had rather an eclectic mix of products. The glass cutting boards were our number one product but we also had a few gift items. It was a conversation with a fantastic buyer at the department store, Alders (now closed) which made us become more focused. She said: “I’m the kitchenware buyer. If you do more kitchenware, I’ll buy it from you because the chopping boards are doing well but I don’t buy clocks – that’s the clock buyer – and I don’t buy mugs – that’s the mug buyer.”

We rationalised the range and just did chopping boards for the next three years. Our aim was to do the best plastic, wood and glass chopping boards on the market. Luckily, chopping boards are a very international product - there is very little cultural difference between a chopping board in Japan and one in the UK. In those early days we were just on the hunt for customers so we threw a bag of samples in Ant’s Ford Ka and set off on a tour of Europe, sleeping in the car. Within 18 months, we’d got distribution in France, Germany and Japan. And then it really was a case of trying to grow the product range and the distribution in a focused way.

Specialising in kitchenware was perfect for us because it’s highly functional and the products are used every day. And what we want to do is design things that are different, innovative and problem-solving. So function came first and then we applied aesthetic and brand, because we wanted people to connect to our products emotionally, so they not only wanted to buy them because they work but also because they would be proud to own them. And because we are designers we will always want to design stuff that looks great.

So who was the first customer?

Alders. That first big order kept us going. We very nearly went bust twice in the first year. We had four products, three of which were duds. The duds were sitting as stock in our warehouse tying up our cash. But Alders really got behind us and gave us the step up which you need as a very small company. One of the big problems we faced was that some of the other large department stores in the UK would say: “We love what you are doing but you are too small. We can’t list you as a supplier because you’ve only got four products. We don’t know if you are financially sound. Until you are more established, we can’t talk to you.”

You understand that but it doesn’t help you get started.

How did you scale up?

In the early days we were able to get bank finance. It takes us two years to develop a product from initial brief, through concept generation, product development, tooling, product testing, safety testing and certification, to get to launch. It’s about two and half years by the time we get paid for the initial idea. So bank finance was really important.

Did you get step changes in order where you get a really big customer and suddenly have to go from say 50,000 units to 100,000?

We were doubling in size for four years in a row, managing not only the financing of it but also the scaling up of the staff. When you are growing at that speed, your systems and your staff are never ahead of the curve. Worldwide, we now sell about 7 to 8 million units a year so scaling up production capacity to meet demand was also challenging.

Export is about 75% our business. We sell in 104 markets worldwide, and as well as our UK head office, we have US and French subsidiaries, with local teams in those markets. Everywhere else we use local distributors or go direct to key retailers. We launch two collections a year and our goal is to deliver them to all 104 markets on the same day. We have a supply chain team based here and three warehouse locations, one in southern China, one in Wolverhampton and one on the east coast of America. Our global supply chain is set up so that we can grow in all our markets at the same time.

We still manufacture the glass chopping boards in the UK. When Dad sold his business we bought the machines and set them up in a 6,000 square foot factory just outside Birmingham. The rest of it is in the Far East, predominantly in southern China.

When you go through the design process, are the designs commissioned by retailers or are you pitching to them?

We pitch. What we are looking for are opportunities to make products that work better or which solve a problem. Storage is a good example. As people increasingly move to urban areas where space is at a premium, things need to work more efficiently in the space you have. We do the research to identify opportunities and then we create design briefs. Then we go to the retailers and pitch the ideas. We have an in-house design team of 16, and we use external designers as well so we get a great breadth of ideas to choose from. We have calculated our hit rate is about 3% ideas to launch and we have about 200 in development at the moment. 3% is not a great hit rate but it’s ok if the 97% get killed early enough. That’s a skill in itself.

How do you involve consumers in the front-end? There is lots of talk now about creating customer personas, images of individuals you might be designing for and so on. Do you do anything like that?

No. We do studies of consumer behaviour within the kitchen environment to get ideas and insights as to whether people will use the products in the way we expect or if they will find other uses for them. We don’t really have consumer panels or create personas because we have such a broad demographic and such an international customer base that it’s hard to identify customer types.

What’s been the most difficult moment?

We have been very fortunate – we found something we both thoroughly enjoy and are good at. But it is challenging and a lot of hard work. You need a very forgiving and supportive family. Perhaps the most difficult thing we have to deal with is counterfeiting and copying product in the Far East. When you have poured blood, sweat and tears into a product and risked huge amounts of money and time, then the copiers bring an identical product to market six months later is both frustrating and dangerous for the business. We have no choice but to be as aggressive as possible in fighting it. In 2010 we spent more money defending our designs than on designing new products which, as a creative business, is a dreadful place to be.

If you had one piece of advice for someone starting their own business, what would it be?

Get a mentor. It was one of things we did very early on. We approached someone I knew through selling for my father, Roger Crudgington, who had worked for Gillette. He started off mentoring us once a month and is now our chairman. He has been massively instrumental in helping us grow the business. You’ve got a wise head which has experienced 90% of the issues you have.

What’s next for Joseph Joseph?

To drive our product development into new categories for the kitchen and our international expansion in all the key markets. We have some fantastic products in development and are very excited about the future. To experience the whole journey of designing a product, making it and then selling it, is really a wonderful thing.

For more information on the course, please visit here.