The Origin of the Internet of Things 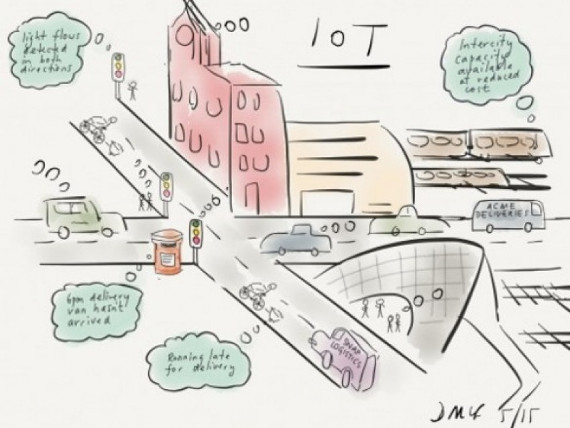 Most of you have probably heard the Internet of Things, or the IoT, mentioned but have you ever wondered what it means and where it all began?

Well here’s my version of it:

In 1999, the Auto-ID Centre was founded, which subsequently formed a unique partnership between around 100 international companies and 7 of the world’s leading research Universities, including the MIT and University of Cambridge. Kevin Ashton, Professor Sanjay Sarma and David Brock were the early co-founders and I became involved as European Research Director a year later setting up the European side of things and pushing the industrial research.

The Auto-ID Centre’s aim was to investigate and understand what came next after the barcode – and particularly what an electronic barcode would look like. Sanjay came to see me in Cambridge in March, 2000.

We discussed barcodes and RFID as an electronic replacement and I think my initial comment was that it all seemed a reasonably dull research activity! I was of course later forced to eat my words as the project expanded but also in our research we realised that RFID was actually a solution to a manufacturing control problem we had been trying to resolve – how to establish an Internet connection for parts and products while they were being made.

The focus of the Centre from the beginning was to research ways in which an electronic tag could be put on every single object in the world, allowing each to be uniquely tracked and potentially controlled – and to do so in the most cost effective way. We realised that to make RFID cheap we needed the smallest chip possible – Silicon was/is expensive – and thus we needed to put all stored data in memory elsewhere. The Internet was the obvious place to start, hence the phrase “Internet of Objects” or “Internet of Things” became a clear reference point and the origin of the internet of things that we refer to today.   believe the term “Internet of Things” was in fact coined by Kevin Ashton in 1999 during a presentation he made at P&G.

Fast-forward 13 years and, today, the IoT means different things to different people.  When I sit in meetings today discussing the IoT and its developments I am not always sure that today’s IoT vision is in line with Kevin’s initial concept and ideas. I often get the impression that IoT is considered to be simply a means of connecting different sensors to a network and it seems Kevin’s vision may have been shrunk over the years?

A full version of this article is available here.