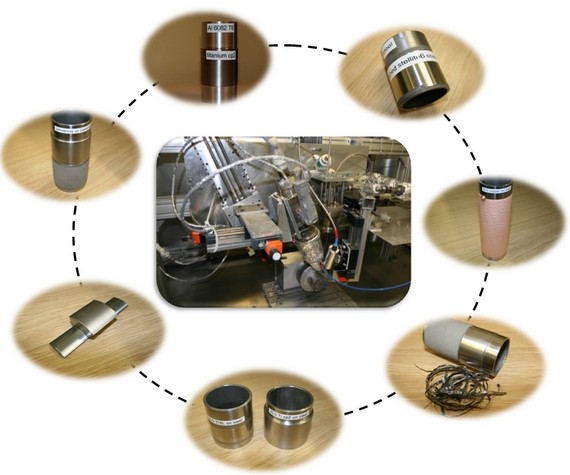 SprayLaze is a metal coating technique which has being developed in order to allow the formation of metal deposits onto a variety of substrates. It has evolved from the Cold Spray process and aims to capitalise on the advantages of this method, while mitigating some of the limitations by removing the necessity for helium as a process gas.

SprayLaze has been engineered in order to widen the range of materials which can be deposited using nitrogen, dramatically reducing process costs and increasing the range of applications for which Cold Spray (CS) may prove attractive.

In this process, powder is accelerated in a supersonic gas jet before it impacts the substrate. A laser heats the deposition site to between 30 and 80% of particle melting point. This significantly reduces particle strength so that, on impact the particles undergo significant plastic deformation which leads to localized heating and flash welding at the interface. The use of a laser allows impact velocities around half those used in CS. Reducing the required velocity allows nitrogen to be used as the process, gas reducing expenditure from £12 per minute for helium to approximately 10 pence per minute. This reduction in operating costs means that SprayLaze may be suitable for many applications for which CS has proved too costly, allowing the fully solid process route found in Cold Spray to find a use in a broad range of applications.

The SprayLaze system consists of a high pressure (10-30 bar) nitrogen gas supply which is split and sent to a converging-diverging (De-Laval) nozzle both directly and via a high pressure powder feeder, where metal powder particles are entrained within it. The two streams recombine and pass through the nozzle where they are accelerated to supersonic speeds. The high-velocity, powder-laden gas jet exits the nozzle and is directed towards a substrate. The powder stream impacts a region of the substrate which is simultaneously illuminated by a laser (current maximum power is 4kW). The Laser power is controlled by a closed loop feedback system (PID) which uses an infra-red pyrometer to monitor the deposition zone temperature in real time.

Coatings have been deposited using Aluminium, Copper, 316L stainless steel, Al-Ti mixed powder, Titanium, Ti64, Stellite-6, WC-Co and others. Conventional deposition technologies involve melting the powder and therefore must be carried out in controlled atmospheres to avoid problems with oxidation, in contrast with SprayLaze. Coatings produced so far compare well against CS and Laser Cladded counterparts, with similar or superior structures being deposited at lower costs and higher processing speeds.