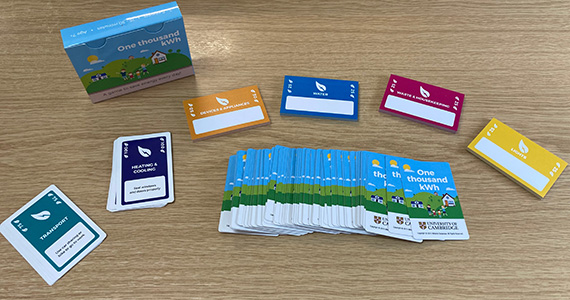 When the Centre on Industrial Sustainability (CIS) developed their One Thousand kWh card game, the idea was to highlight steps that all businesses could take every day to reduce their energy consumption and become more sustainable. But when Ian Bamford, commercial director at CIS, passed the card game to Robert Flores, vice president of sustainability at Berry Global, the Fortune 500 plastic packaging manufacturer, it inspired something much bigger.

The team at Berry Global started playing the game and realised that many of its principles could be applied to their factories and business. “We were really inspired by the game,” said Jim Belbas, vice president of continuous improvement and sustainability. “We were looking to implement a major energy reduction drive, and we realised that a lot of the game’s principles would resonate with the people we needed to engage, the technical people and maintenance managers at our sites who are key to the plant’s energy saving and financial performance.”

Drawing from the game cards and the discussions that spun out of playing the game, they began to build a database of actions for the engineering materials division. This involved adapting some of the game’s general business focus to Berry’s specific plastics manufacturing industrial functions under the banner of 1 Million kWh Challenge. But even that expansion of the game’s scope proved to be too small. The project was so successful that it expanded to a 100 Million kWh Challenge across the company’s 290 factories.

“A card might say ‘Shut off the lights when you leave a room’, and we started to think about what that looks like in our factories,” said Jim. “We started looking at all of our lighting, and that led us to other ideas, such as the impact of converted from florescent lighting to LED across many different sites. So retrofitting the lighting became one of the actions.”

“The scale of the ambition blew me away,” said Ian Bamford. “Often, we find that companies are worried about setting ambitious targets because they are unsure if they are realistic. But with Berry, it was great to see that they started out with ambition and that led to them realising that not only could they achieve it, they could make it a whole lot bigger. It’s a great example of the importance of just getting started with energy reduction, and how that can lead to further and bigger ideas.”

Berry Global ultimately invested over $30 million in the project and were recognised with the International Energy Project of the Year award from the Association of Energy Engineers. And it all started with a Cambridge card game.

“It gave us a language for talking about how energy reduction leads to cost savings and sustainability,” said Jim. “And it helped engineers across our factories to feel part of the challenge. It was a great inspiration.”

The Centre for Industrial Sustainability developed the One Thousand kWh card game. CIS works to develop knowledge and tools that accelerate the transition towards a sustainable industrial system. Find out more about how your organisation can benefit from CIS research and approaches through IfM Engage’s Sustainability Association and consultancy services