How TfL is mapping relationships for better results

How TfL is mapping relationships for better results...

The Cambridge Business Ecosystem Mapping Framework, developed by the Cambridge Service Alliance at the IfM, enables identification of value relationships between members of an ecosystem, and analysis of how that value could be increased for mutual benefit. The framework was recently applied to a large public sector project, mapping the ecosystem of Transport for London and its stakeholders. We talked with Dr Florian Urmetzer to find out more.

On any Friday evening, London’s Leicester Square tube station is a throng of activity. Office workers head home after a long week, crossing paths with shoppers, tourists, theatre-goers, and those heading to restaurants, bars and clubs to start to their weekend. In a short space of time, thousands of other people come and go, relying on the tube to help them reach their destinations.

Like all the underground stations across London’s bustling West End, Leicester Square forms part of a transport network that is the arterial system for the life blood flowing around the local economy. West End businesses, restaurants, theatres, shops, hotels and museums rely on this transport corridor, as do the institutions of government and state extending down towards Westminster.

All these varied commuter destinations represent local organisations, which are part of the ‘ecosystem’ of the West End’s transport network. They are stakeholders who would be affected by changes to the operation of the London Underground.

So as Transport for London (TfL) plans its improvement projects in the West End, how might it better understand its ecosystem, and consider how the organisations within it are likely to be impacted?

And in doing so, could it identify ways to work more effectively with the organisations within the ecosystem, and find opportunities for mutual increases in value?

A business ecosystem is a network of interdependent organisations and individuals. Any company needs to work alongside other bodies: suppliers, competitors, partners, complementary firms, policy makers, customers, and other stakeholders. Ecosystem organisations interact in ways which include both competition and cooperation.

Significantly, there are exchanges of value within a business ecosystem, in terms of how organisations can benefit each other. Dr Florian Urmetzer of the Cambridge Service Alliance (CSA) explains:

Value exchanges change at different stages of a project. If managers can pinpoint project stages when particular relationships are critical, they can better assess how they could be strengthened for mutually beneficial results. In order to do this, the relationships need to be identified and mapped.

CSA researchers have developed the Cambridge Ecosystem Mapping Framework to facilitate this. As Florian explains:

“What we try to do is explore the question of how managers perceive the complexity in their value relationships. We then ask how this complexity can be used, described, and harnessed to provide better service or outcomes.”

The WEC project considers a range of underground stations critical to long-term performance of the network in the West End. Previous TfL studies have looked at individual stations to consider delivery of capacity improvements and step-free access. But TfL wanted to look at the area more holistically, developing a plan which considered stations across the area as well as other forms of public transport and the needs of the West End and the wider city.

Through focus group discussions led by a CSA researcher, the WEC project team created a visual representation of the ecosystem, and mapped the direct value transfers within it. 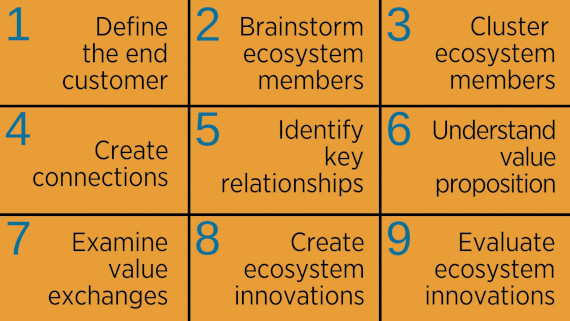 The first step, defining the end customer, helped the WEC team to specify the beneficiaries of transport improvement. In addition to the direct benefits of a better service for fare-paying customers, the team could identify customers in a broader sense to include those who would benefit economically or socially from transport improvements.

Next the ecosystem members were identified and clustered – with 64 members in 13 clusters representing internal TfL teams, local community and community actors, financing organisations, infrastructure deliverers and public institutions. Ecosystem members include local, regional and national political players such as the Greater London Authority, Secretary of State, MPs, local councillors and the Mayor of London. It also includes other statutory bodies such as the British Transport Police, London Fire Brigade and the Environment Agency.

In step 4, the team mapped out connections between members. This led them to highlight an important aspect of public sector projects: the approvals process. As Jennifer Henderson of TfL explains:

Thus they identified two key types of direct value exchange. Direct financial transactions flow to stakeholders who are providing a service. Additionally, there are stakeholders with a more strategic relationship – identified by the additional direct transaction of approval. Both types of transactions change at different stages of the project. 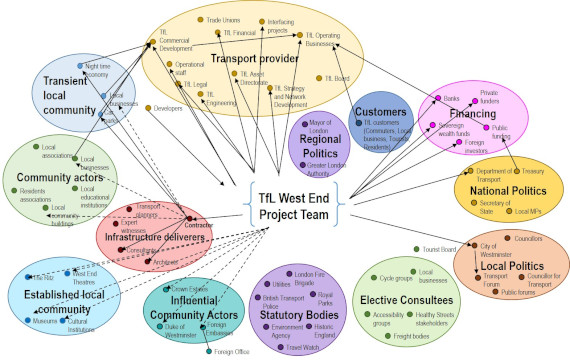 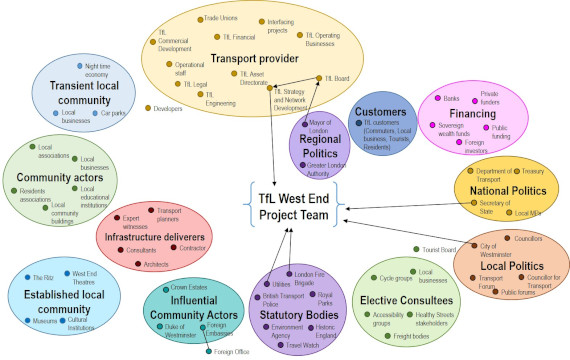 Building value in key relationships: TfL and the Mayor of London

The transactions maps made it easier for the WEC team to identify the key relationships and transfers of value at each stage of the project. They could then investigate ‘ecosystem innovations’: strategies to develop those key relationships to increase the value for both parties.

As a starting point, the team chose to focus on the relationship between itself and the Mayor of London. TfL is responsible for delivering the Mayoral Transport Strategy. Given that the Mayor holds elected office for a four year term, the team found that connecting its own project planning to the Mayoral electoral terms provided better strategic alignment and could increase value for both parties.

How would this work? The project team identified opportunities to phase delivery of project elements within the timeframe of Mayoral terms. There are benefits to the Mayor through enhanced public perception, by demonstrating an ability to deliver on promises made to the electorate. There is also potential for better alignment of transport projects with other Mayoral goals such as housing, air quality and public health initiatives.

In return, the value benefits to WEC would be increased likelihood of support and approval from the Mayoral Office. In turn, this would also lead to greater likelihood of funding and support from other parties.

The team also identified that Mayoral support early in the project is likely to lead to more efficient delivery and therefore reduced costs. Conversely, failure to build strategic alignment creates a disconnect between TfL and Mayor, and is likely to lead to value slippage in cost and delivery.

In summary, mapping and understanding this pivotal relationship has uncovered innovations that can be created for better strategic alignment. Similar analysis of other key relationships is also likely to demonstrate opportunities for creating and capturing increased transfer of value in the ecosystem.

Attend a one day course to learn about our approach to mapping relationships within your business ecosystem. Find out more.