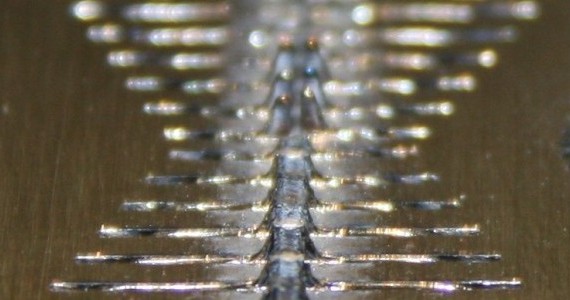 3D Laser surface modification enables features to be formed from the substrate material. The process is based on the Surfi-Sculpt® manufacturing technique originally developed by TWI Ltd. using electron beams with electromagnetic coils to deflect the beam. Using a laser beam as the power source offers advantages such as generating these novel surface features in atmospheric conditions. The technique enables surface features to be produced on a range of substrates including metals, polymers and ceramics.

The Surfi-sculpt process is characterised by repeated laser swipes making multiple returns over the same area inducing material movement to sequentially build surface features. It is thought that this is due to a combination of surface tension effects in the melt pool due to temperature gradients and heat management between repeated swipes.

The Laser system consists of a 1064nm fiber laser between 200W and 1kW attached to a scanning system. Two galvanometer driven mirrors are use to scan the beam whilst a post objective lens focuses the beam as shown in figure 2. This system enables focusing in three dimensions.

A wide range of features can be produced ranging from single run lengths producing thin features to star features as showing in figure 3, All swipe formations require multiple repeats and the heat management between them.

It may also be possible to produce features upon existing features by applying multi-stage treatments that have already been successfully employed by electron-beam surfi-sculpt®.  This was achieved by producing a star feature and then rotating it 90° and repeating the process. Multiple additional features can potentially be produced from the original feature.

The Surfi-sculpt process occurs within similar parameter ranges to that of the humping phenomenon in welding and it is thought that the processes are related. Surfi-sculpt also occurs at speeds slightly lower than humping and therefore pre-humping mechanisms are also considered.

High speed imaging has revealed that oscillations occur in the melt pool following the laser material interaction. It is suggested that these oscillations are due to a Kelvin–Helmholtz instability of the surface melt layer. The strong material and shielding gas influence seen to date in production of Surfi-Sculpt also suggests influences of surface tension and Marangoni convection.

This work is funded by the EPSRC and TWI Ltd. The authors would like to thank the Engineering and Physical Sciences (EPSRC) Engineering Instrument Loan Pool and Adrian Walker for the high speed camera and Cavilux HF laser. Dmitry Badyukov, from Arges GmbH, for his help with programming the scanner. Ali Khan, from TWI, for his helpful suggestions of experimental methods and stimulating discussions.