IfM Home > Insights > Sustainability > The environmental impact of a Playstation 4

The environmental impact of a Playstation 4

When journalist Lewis Gordon got in touch to ask if we could help him assess the environmental impact of a Playstation 4, we sent him in the direction of IfM’s Dr Claire Barlow, expert on eco-efficient manufacturing. Along with her colleague Dr John Durrell from the Bulk Superconductivity Group in the Department of Engineering, they meticulously deconstructed the PS4 and assessed its likely lifetime footprint, with some eye-watering results written up in an excellent article for The Verge.

With the PS5 due to launch next year, the soon-to-be-obsolete PS4 will be removed from shop shelves. Lewis’s mission was to understand the environmental and ethical consequences of mass producing consoles, games stations and small electronics devices, particularly in the light of these intentionally short lifespans and the consequent increased number of consoles produced.

“In an effort to explore both the environmental and human impacts of Sony’s current video game console, I decided to take one apart. Under its plastic hood, I discovered a machine that spans continents and deep time, touches thousands of lives (for better and worse), and leaves an indelible, measurable stain on Earth and its atmosphere.”

In the Engineering labs, Claire and John deconstructed the entire product, analysing and weighing up (literally) each constituent material, and attempting to trace origin and likely journey. This included the heavily processed packaging, the types of plastics used in the console itself (acrylonitrile butadiene styrene (ABS) and polyoxymethylene (POM)), and the steel, tin, gold and aluminium found in its innards. Lewis’s investigation unpicks troubling stories such as methods used for the extraction of such materials including cyanide leaching in open mines, and “conflict materials” from countries employing child labour and miserable working conditions.

His fascinating study of the tiny microchip at the heart of this powerful machine reveals the origin of the materials and the processes involved in its manufacture. The pristine conditions required for assembling millions of chips, which each involve around 400 process steps, demand that any impurities are removed from the environment of huge assembly facilities, with ultra-pure water, air, argon, and nitrogen pumped around vast buildings, using enormous amounts of electricity. 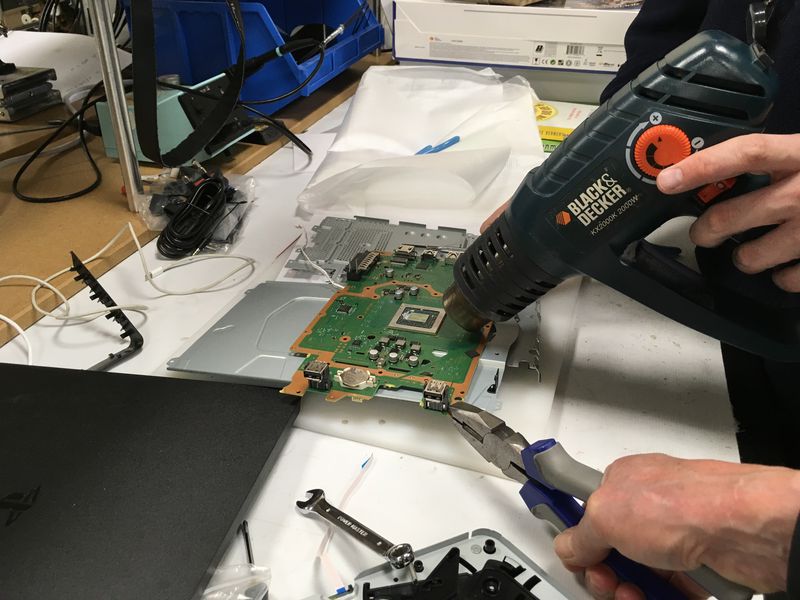 In his article, Lewis also covers the factories in China where the consoles are assembled. Two of the biggest contract manufacturers have been heavily criticised by international human rights organisations including China Labour Watch for poor working conditions.

In his attempt to reach a figure quantifying the impact of the PS4, Lewis draws on results from Claire and John:

“A few days later, Barlow emailed me the results of her and Durrell’s findings. The equivalent of 89 kilograms of carbon dioxide is emitted into the atmosphere with the production and transportation of every PlayStation 4.”

That figure can be multiplied by 100 million to reflect the number of consoles Sony has sold to date. Lewis adds:

“Now we arrive at a more imposing number, one that feels like it captures the machine’s multitudes: the extraction and production of its raw materials, the global transportation of components, and the gigantic factories it’s assembled within. Since the PlayStation 4’s release in 2013, approximately 8.9 billion kilograms of carbon dioxide have been generated and subsequently released into the atmosphere.”

“What was also remarkable about deconstructing the console was how quickly it transformed from a single object into an assembly of diffuse materials, each with their own histories, protagonists, and processes. As I think back to the cadaverous heap of metal, plastic, and electronics on the lab table in Cambridge University, it occurs to me that the PlayStation 4 has the most dazzling and problematic parts of global capitalism purring in unison. It is an exquisite, leanly designed machine pulsing with the exploitation of Earth and its people.”