This study examines the state of additive manufacturing (AM) innovation within UK-owned organisations that have published AM-related patents or other literature between 2006 and 2015 inclusive. Other organisations who play a vital role in the AM innovation system in the UK may not appear in this report if they have neither produced publications (which are included in secondary databases) nor had any patents published in that period.

Whilst previous studies have considered this topic by reviewing either patents or scientific/technical literature, this report looks at both, with the aim of producing a comprehensive overview of AM activities, specifically by UK organisations. Also in contrast to previous studies, we have aggregated the data at the organisational level. Our aim was to identify active players in AM, including universities, through their publications1. In total, our study found seven types of organisation namely company, university, research institute, governmental organisation, hospital, charity and museum. All organisations have been geographically located according to their operational activities (rather than their registered address) in order to analyse where AM activities are actually taking place in the UK. 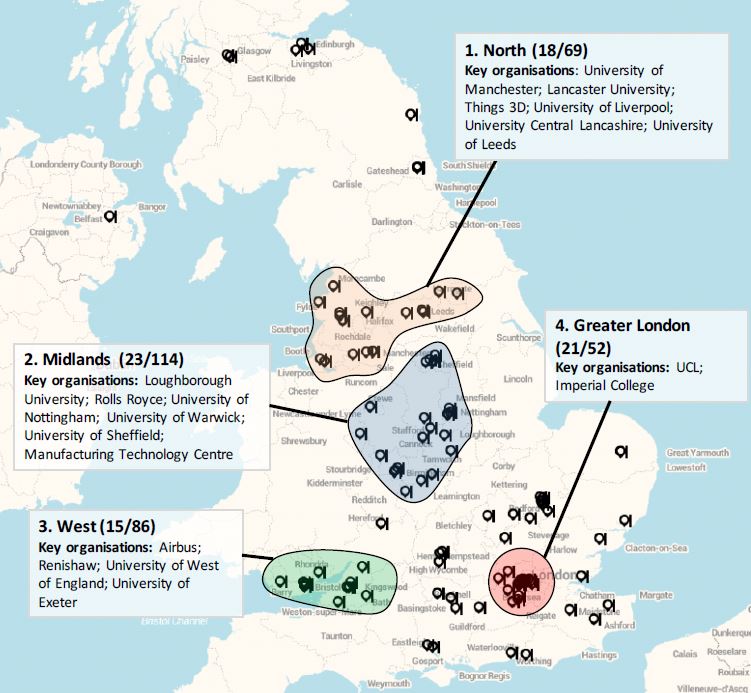 From our analysis of the geographical spread of organisations, the economic sectors in which they are active and their supply chain positions, we conclude that there are four AM clusters in the UK. Cardiff in Wales forms part of a ‘West’ cluster together with Bristol and Bath in England. Two other clusters were identified in the Midlands centred around Loughborough, Nottingham and Sheffield, focusing on high technology and manufacturing; and in the north around Liverpool and Manchester. A substantial number of companies are based within Greater London, forming a fourth cluster with a focus on the health and pharmaceutical sector. None of the clusters particularly stand out in terms of size.