Student insights: Can haptic gloves make it easier to learn a skill?

Ben Proyer has just completed the IfM’s MPhil course (ISMM), and is now at the IfM as a visiting graduate student. He has been part of an IfM research team testing the effectiveness of haptic gloves and virtual reality technologies for industrial skills development. We spoke with Ben to gain his perspective on the project.

Please tell us about the recent project and what you were trying to find out.

I’ve been working as part of a team with Thomas Bohné, Lukas Hysky and Andreas Leubner to better understand how wearable technologies could be used and applied in industry. Most recently this involved an experiment in which participants had to learn a new skill wearing haptic gloves to find out how the technology affects their performance, compared with participants who learned the same skill using conventional methods.

We know that many companies are exploring these technologies, and some are already investing a lot in virtual, augmented or haptic technologies for training purposes, but there has been very little research to compare the effectiveness of these new technologies with traditional methods of learning new skills.

What are haptic gloves?

Haptic gloves give your hands feedback information – this could be through vibration or force or other sensual feedback. Some gloves even have air bubbles that can be pumped up to give specific sensations, such as feeling a spider walking across your hand.

We’ve been working with gloves that give vibration and force feedback. If you grab an object like a mug in virtual reality, the gloves hold your fingers in place so it really feels like you’re gripping something.

Virtual technology is being explored for lots of potential purposes including use cases in manufacturing, the military, aerospace or surgery. There is tremendous scope for what it could offer, because it can simulate any environment without huge costs or any danger.

What did the experiment involve?

We were based for two weeks at EEF’s Technology Training Centre in Birmingham, working with 140 apprentices and around 100 members of staff with different backgrounds, ages and experience. Participants were taught a new skill – the assembly of a tractor clutch provided by John Deere – using three different approaches. The first group was asked to follow paper-based instructions. The second used virtual reality technology with two controllers and a headset – a ‘standard’ consumer-grade version that is already sold in shops. The third group used haptic gloves with force-feedback and a headset.

Then all of them had to perform the same clutch assembly task in reality with a real clutch and we measured and compared performance across the three training methods.

What did you find?

We are still analysing the data as we just finished the experiment, but our preliminary analysis indicates that the group using the commercially-available VR headset and controllers had a slightly stronger performance after the training.

However, we are also aware that various factors may be at play and influencing this. Haptic gloves are still in their infancy in terms of technological development. Participants using the gloves had to get used to them while also focusing on the assembly process. As this technology improves, we can envisage that it will become easier to manipulate things in virtual reality using the gloves, and the value for training purposes may improve.

It is important to start building a better research-based understanding of how such technology can help already, and keep measuring improvements over time as the technology progresses. We also want to research the effectiveness for different types of tasks, as this also plays an important role.

From a personal perspective Ben, what did you gain from being involved in this project? 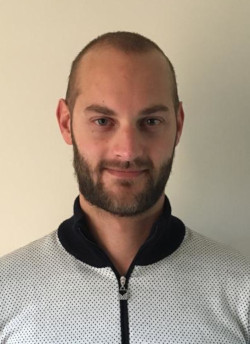 It was great to be involved in a research project and a large experiment with people who actually need to access training methods for industrial skills. We had a wide range of people, all ages, including people who didn’t have much experience of using computers! Most participants really engaged with what we were doing, and we received some really positive feedback.

It was amusing at times to see people’s behaviour in virtual environments – things like trying to put the real controllers down on a virtual table, it was funny to watch!

I learned a lot about project management too. There were quite a few challenges in coordinating different research partners and companies, including some technology start-ups, and we had some bottlenecks.

I’ve enjoyed this whole experience and I’m considering whether to stay in research.