The photovoltaic effect was first observed in 1839, but it was not until 1955 that the first commercial photovoltaic device was marketed in the US, with 2% efficiency. Efficiency then progressively increased – alongside manufacturing cost reduction – to improve viability, and from the 1980s onwards adoption rates accelerated rapidly. More recently, governmental subsidies have fuelled further growth, leading to a peak around 2011 when the combination of the economic crisis and industry over capacity led to a slump. Despite this, the upward growth profile is predicted to resume over the next years. One important but less well-documented aspect of the photovoltaic story is the role global value network evolution has had in the development of this major global industry. CIM tools have been used to map the progression of the global value network through emergence and various cycles of reconfiguration, to identify key patterns and learnings that might apply to other industries.

One key aspect of the study was to define the key evolutionary stages that have occurred, and to explain the key transition steps that enabled the shift between value network configurations. The findings identified four value network generations where the major cause of reconfiguration was the emergence of new technologies linked to specific end applications. The interesting aspect from a value network perspective is the shift in the nature of the network across the technology generations, starting with a vertically integrated model in the first generation or nascent phase, splitting into a tiered model with stable, mature partners at second generation and then becoming increasingly fragmented and complex at third and fourth generations as new players enter with specific expertise in emerging technologies and applications. Future evolution might be expected to include repeated cycles of consolidation to remove complexity, and fragmentation associated with continued innovation in this sector.

Another key aspect of the study involved analysis of the ecosystem enablers for early maturity. The analysis illustrated here focuses on the transition between first and second generation networks (with the ecosystem conditions for the latter also shown). The study helped to identify the key ecosystem players that had an impact on enabling the shift to early maturity, and – most interestingly – the nature of their interventions. For example, this helped to answer questions such as: Where are the sources of funding coming from? Where is the R&D being carried out? Which policy groups are important? Where are the demonstrator facilities for new technologies? Which critical service providers do they use? 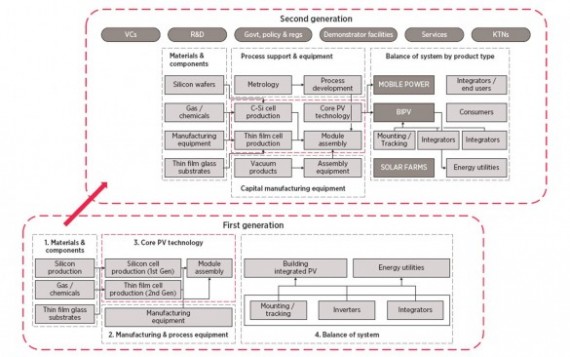